Where is international finance capitalism taking Europa? How democratic and social is the EU really? Most European citizens feel increasingly forced into a structure that serves the rich and powerful. »Geld regiert die Welt« (»Money rules the world«) is not just a saying, it is the reality we live in – today more than ever. Europe should be a union that protects all Europeans as equals and ensures their well-being. But transnational solidarity is extinguishing, member states are leaving the EU, a political shift to the right is sweeping through all countries. The elites increase their wealth and the 99% fall further behind. This has radical consequences… How do we save our European community? How do we overcome the debt and banking crisis, social inequality, climate change and increasing migration? Certainly not by carrying on as before. Do we really want to surrender Europe to neoliberalism? Shouldn’t the EU institutions become more transparent and accountable to the citizens? Shouldn’t we finally put the well-being of the people first? Shouldn’t European politics control the banking and financial sector more strongly and no longer let its decisions be influenced by big business? Don’t we as Europeans share the same democratic and social values? Then it’s time to stop riding the financial bull and save Europa! Don’t you think so? 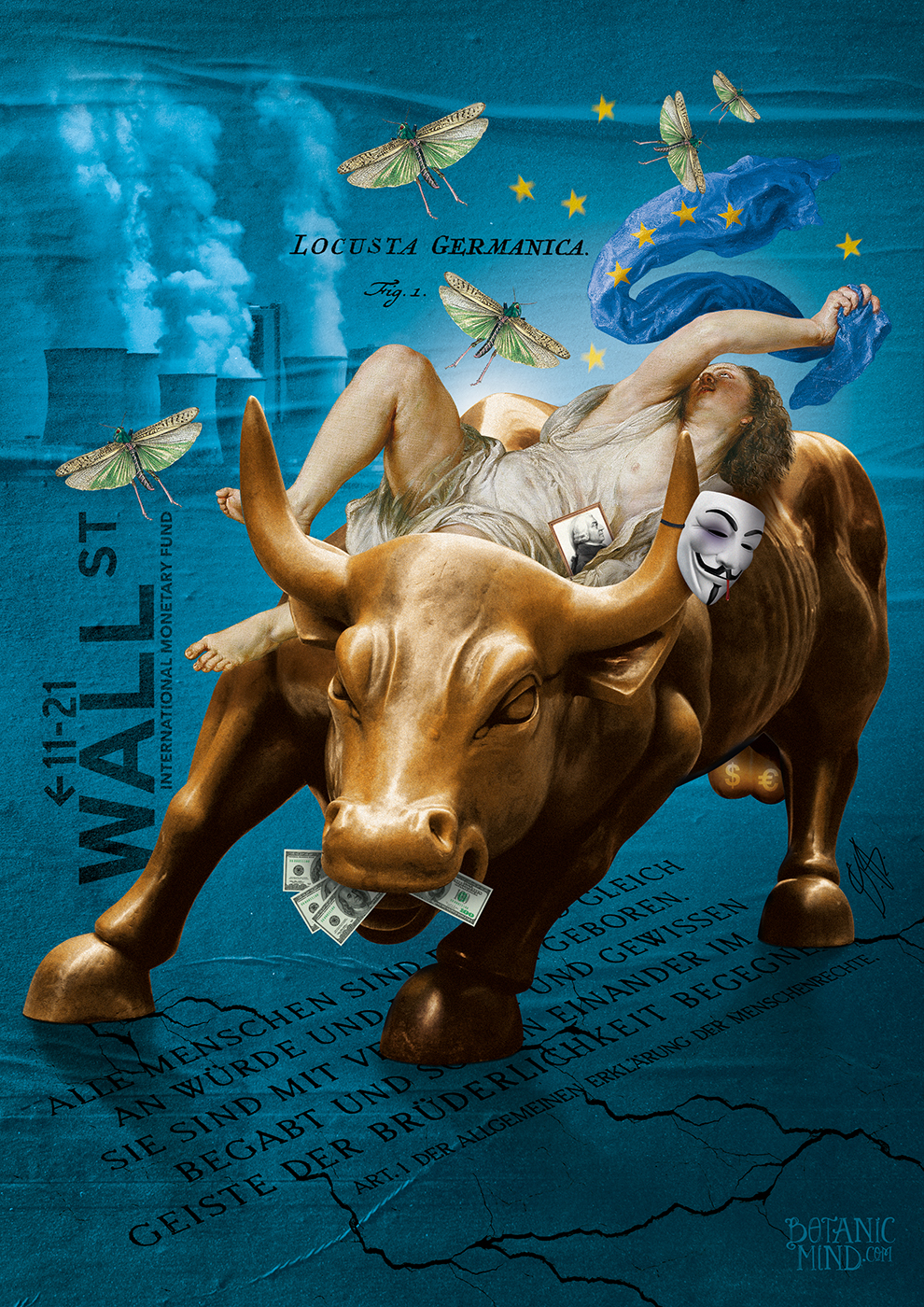 BOTANIC MIND FERTILIZERS:
Charging Bull: Charging Bull, sometimes referred to as the Bull of Wall Street or the Bowling Green Bull, is a bronze sculpture that stands in the Financial District of Manhattan in New York City. The 7,100-pound (3,200 kg) bronze sculpture, standing 11 feet (3.4 m) tall and measuring 16 feet (4.9 m) long, depicts a bull, the symbol of aggressive financial optimism and prosperity. The sculpture was created by Italian artist Arturo Di Modica in the wake of the 1987 Black Monday stock market crash. Charging Bull has been a subject of criticism from an anti-capitalist perspective, such as in the Occupy Wall Street protests of 2011.

The Rape of Europa: Titian’s Rape of Europa, painted in Venice ca. 1560–1562, is inspired by a story from Ovid’s Metamorphoses. Infatuated with Europa, Jupiter—king of the gods—transforms himself into a bull. Europa, close by with her companions, approaches the beautiful creature with hand outstretched. Finding him tame, she plays with the bull in a meadow and entwines flowers around his horns. When she climbs playfully on his back, the mischievous god seizes the opportunity and springs into the sea, spiriting away the target of his affections while she clings to him in terror. Although the act of sexual violence is not depicted in the painting, it is implied through Europa’s open-legged posture and her expression of fear as she is dragged off by Jupiter.